We’re All Going On A Summer Holiday…(or are we?)

The Only Way Is Up?

The first death from Covid-19 in the UK was confirmed on the 5th March, with the grim milestone of 100 deaths reached less than two weeks later on the 18th March.

The government response to the pandemic has had mixed reviews.

The lockdown has been criticised for being enacted slower than our continental peers, waiting until 23rd March before ordering the public to stay at home to avoid hospitals being overwhelmed (which thankfully to date this has been averted). Experts model that given the disease was doubling in size every three to four days, if the UK had locked down on the 16th March, the death toll would have been reduced by at least half.

There has also been negative reporting around the protection of the elderly in care homes, supply of protective equipment to front line staff (including in care homes), delay in setting up the track-and-trace scheme, development of a smartphone app (which was eventually pulled) and the chief advisor Dominic Cummings breaking lockdown rules. Unsurprisingly opinion polls on the governments handling of covid-19 have the UK below 40% (for those answering “somewhat” or “very” well), significantly below Germany and Italy at 70%.

From an economic perspective there has been some positive news.

The Chancellor Rishi Sunak announced a series of unprecedented measures to support the economy in the first phase of the governments response which aimed to limit the fallout from lockdown (second phase is re-opening, third re-building and fourth reducing the deficit).

One of the eye catching initiatives was the job retention scheme announced on the 20th March, where 80% of the wages of over 9m workers up to £2,500 were to be paid by the government. Whilst this and other initiatives have been hugely expensive, taking the UK’s national debt from 84% to over 100%, it’s seen as being successful with unemployment kept below 4% despite the economy contracting nearly 10% over the quarter.

Should I Stay Or Should I Go Now?

It’s with this context as the UK emerged from the pandemic lockdown, we commissioned a consumer poll between 6-9th July to find out the nation’s current mood on summer holiday locations.

These were the headlines: 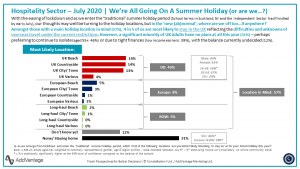 We plan to run a poll in September to see if the intent matched the reality.